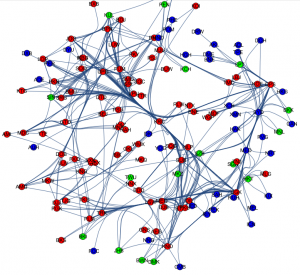 A network consists of nodes which represent some entities with connections (edges) between them, the edges. Networks, or graphs, play a central role in a wide variety of domains. Examples include for instance the Internet, the World Wide Web, biological networks, social and economic networks and transportation networks.
Recent years have witnessed a substantial new movement in network research, with the focus shifting away from the analysis of single small graphs and the properties of individual nodes or edges within such graphs to consideration of large-scale statistical properties of real complex networks. Specifically, many of these complex networks show the small-world property in which most nodes can be reached from every other node by a small number of steps. Additionally, several of these networks are characterized by a statistical abundance of “hubs” with a very large number of connections compared to the average. The worldwide air transportation network has precisely these characteristics; its structure is mostly determined by the actions of airline companies, but it is also the outcome of historical developments arising from geographical, political, and economic factors. 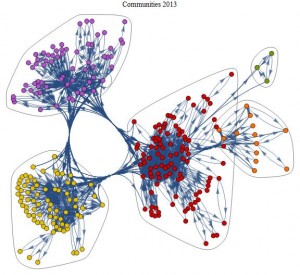 The main objectives of this research theme in DEVI are: This is a multidisciplinary research theme, that uses tools from mathematics, algorithms and economics.

Hover over a name for more details.